All smiles going into this weekend ☺️☀️
Can you believe that Winter Games is less than two weeks away?!
The Philadelphia Polar Plunge is happening NEXT WEEKEND, and it would be a whole lot COOLER with you there! 🥶❄️
WOW! It is pretty clear from the smiles in these photos from Saturday, that this year’s Winter Games Polar Plunge was one to remember 🥶💙
Shoutout to the winner of our Eagles Championship Game Sweepstakes, Beetann Creighton who gave the ticket to her two sons, Tim and Tom Creighton! Tim and Tom are pictured with Special Olympics Pennsylvania Montgomery County Program Manager Scott Otterbein and his daughter.
Meet the Special Olympics Pennsylvania athletes who will join @SpecialOlympicsUSA to compete in Germany this summer on a world stage! While these two athletes couldn’t be more different, they share one important thing in common: They couldn’t be prouder to represent Special Olympics Pennsylvania at this year’s Games!

The things that Special Olympics Pennsylvania athletes, coaches and volunteers have accomplished in 2019 are nothing short of sensational.

And so as we take time to savor these final few hours of the year and look ahead to 2020, we want to share our list of Special Olympics Pennsylvania’s Top 10 Moments of 2019.

Today, we’re releasing the Top 5 moments and in case you missed Nos. 6-10, you can find them here.

As always, we can’t thank you enough for all of your support. We truly wouldn’t be able to do what we do without you. So without further ado…

5) The Inaugural Indoor Winter Games: Even though a major snowstorm shortened 48 hours worth of competition into one long, wild day (some gold-medal hockey games didn’t finish until 8 p.m.!) that just added to the unbelievable memory that was the first Indoor Winter Games in York. It was our honor to launch this event in Pennsylvania (which, in addition to floor hockey, includes competition in speed skating, figure skating and bowling) and we’re looking forward to many more successful years to come.

4) Aerie <3’s the #InclusionRevolution: Perhaps no moment better encapsulated the true nature of the #inclusionrevolution than this phenomenal campaign from Aerie, called #AerieREAL. We were honored to have six athletes from Pennsylvania join Special Olympics New York athlete Chelsea Werner, USA gold medalist Aly Raisman and model Iskra for a photoshoot in July. We’re so incredibly proud of Emily, Jessica, Danielle, Hannah, Daijah and Kaitlyn. Click here for photos and bios from the entire campaign.

3) Summer Games turns 50: What began as a small gathering of a little more than 100 athletes at West Chester University in 1970 turned FIFTY this year, and the entire weekend was incredible. Featuring more than 2,000 athletes from every program throughout the state, this year was highlighted by an awesome Opening Ceremonies, Nathan Boyle winning the Sheetz Family Award for Excellence and so many teams and individuals accomplishing their goals.

2) PA athletes shine in Abu Dhabi: Four gold, six silver, one bronze. That was the final medal count for Pennsylvania athletes representing Special Olympics USA at the 2019 World Summer Games in Abu Dhabi. The Clinton County Hawks, one of the more dominant teams in SOPA history, came together to win the gold. Meanwhile, powerlifter Delina Rodrigues set a personal best while capturing the gold in dramatic fashion and Aaron Keller came from behind in the 10000m as part of a furious race to the finish to earn first place. On the tennis court, Valerie Stiffy and Brianna Whorl both earned silver medals in singles and doubles play. It was truly the trip of a lifetime.

1) Izzy wins it at the buzzer: Hopefully by now you’ve seen the unbelievable game-winning layup at Fall Festival by Beaver County athlete Izzy Scialabba, but if you haven’t — watch it and you’ll see why it’s our No. 1 moment of 2019. Not only did Izzy’s bucket win the game for his team in this Unified event with members of Villanova University‘s men’s basketball team, but the play honored his late father. Izzy and his dad, James, were watching the 2018 version of the Unified game from the stands and spoke to each other about how great it’d be to play on that court. Wouldn’t you know it, Izzy was selected to suit up for this year’s game. But, tragically, James lost his long battle against cancer just weeks before this year’s Fall Fest. After making the shot, Izzy was lifted on his teammates’ shoulders and pointed to the sky in remembrance of his dad.

Thank you to everyone for making 2019 so awesome and we absolutely can’t wait to see what kind of memories we create together in 2020!

The things that Special Olympics Pennsylvania athletes, coaches and volunteers have accomplished in 2019 are nothing short of sensational.

And so as we take time to savor these final few hours of the year and look ahead to 2020, we want to share our list of Special Olympics Pennsylvania’s Top 10 Moments of 2019.

We’re releasing half the list today (Nos. 6-10) and will publish the top five moments tomorrow as you prepare to ring in the new year!

As always, we can’t thank you enough for all of your support. We truly wouldn’t be able to do what we do without you. So without further ado…

10) Michael “Money” Maker announces Steelers Draft Pick: The NFL Draft is an exciting time for any sports fan, but this year was particularly meaningful for Mike “Money” Maker, SOPA Vice President of Development Kraig Makohus and Pittsburgh Police Chief Scott Schubert, who were all on stage to announce the Pittsburgh Steelers‘ 5th-round pick (141st overall) in this year’s Draft. Complete with ESPN coverage and a scrolling bottom line.

9) Union Unified team scores a huge victory: This year’s version of the MLS Exchange Game took a local rivalry to new heights as our Philadelphia Union Unified team traveled up the New Jersey Turnpike to take on the New York Red Bulls. After attending a training session and meeting the Union players and coach Jim Curtin in August, the team was ready to take the field for their Sept. 22 match. On an absolutely beautiful afternoon for soccer in Harrison, NJ, the Union Unified team jumped out to a quick 2-0 lead before holding on for a thrilling 3-2 win.

8) SOPA announces Center for Inclusive Leadership: Announced at this year’s Fall Festival at Villanova University, The Center for Unified Leadership will serve as a “center of excellence” for Special Olympics’ leader development efforts including research to foster a deeper understanding of how individuals with intellectual disabilities lead. The Center will also develop and review curricula, tools and training. This marked the first step in a collaboration with Special Olympics International, which will include a network of similar hubs all over the world based on further partnerships with universities, businesses, foundations and thought leaders interested in promoting inclusive leadership.

7) Ernie Roundtree runs the Boston Marathon: Every day we’re continually amazing by what our athletes accomplish. And Monroe County‘s Ernie Roundtree (who also happens to be a SOPA Board Member) qualifying for — and running — the Boston Marathon might just top them all. Ernie is an incredible long-distance runner and despite aches and pains throughout his body over the course of a grueling 26.2 miles, he finished what is arguably the most prestigious marathon in the world last April in 6 hours and 26 minutes.

6) SOPA Hall of Fame welcomes four new members: At this year’s Leadership Conference at Penn State University, not only did 15 Athlete Leaders earn degrees from Athlete Leadership University, but four individuals (two athletes and two volunteers) were inducted into the Special Olympics Pennsylvania Hall of Fame. Congratulations to Nina Kaneriya, Corey Markle, Bellamarie Bregar and Herb Packer on their incredible achievements within and outside the world of sport. 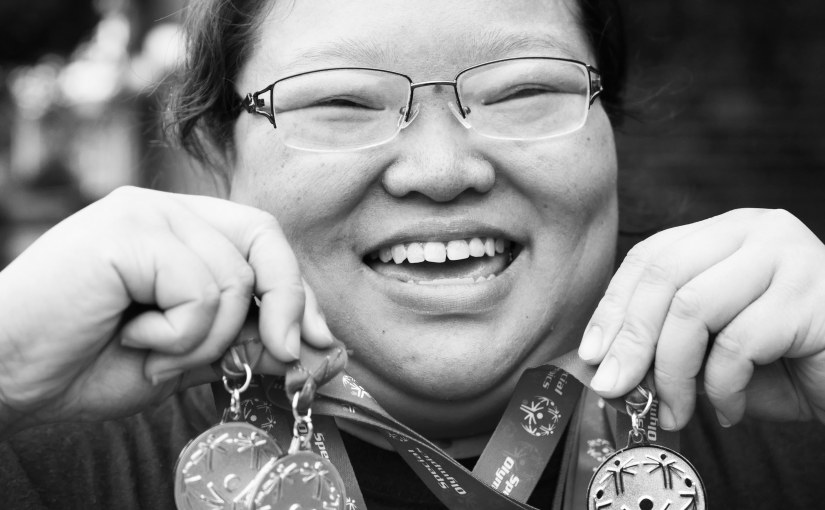 “Because I know I’m strong. I know I’m really strong, so I thought that I should try powerlifting. I had done volleyball for a couple of years before this and this is my first Central Fall Sectional for powerlifting. I loved it. I didn’t get to go to Olympic Village, but I did get to go there other years and overall it was really cool. … I’m the only girl in Area M who does powerlifitng, so I keep the guys in line. The first time I ever tried it, I think I lifted 75 kg and I can bench press 95 kg. Today I deadlifted 250. Overall, it was a little easy and a little hard to get the form down. It was a little bit of both. … I feel really good about it. I feel really upbeat and proud. I’m from Carlisle, so I have to represent Area M. [Being in Special Olympics] is the best because it means I get to meet other people in different counties and I get to see other women or other people, men and women, compete in powerlifting.”

From all of us at Special Olympics Pennsylvania, we wish you and your family a wonderful holiday season filled with delicious food, joyful storytelling and memorable moments to last a lifetime. 🎁 ☃️ 🎀

Please enjoy this year’s holiday video, which features a number of our athletes recalling their favorite holiday memories! And feel free to share your own holiday favorites with us in the comments.

In addition, check out our holiday card this year, which was designed by Montgomery County athlete Eric Salomon! And the calligraphy inside was done by our very own Beth Boardman!