Sunday's Eastern Fall Sectional at DeSales University was cold, wet and AMAZING! We had such a great time seeing so many athletes compete for a spot at Fall Festival and deliver incredible efforts across the board, despite the elements.
🚩🏈😎
The bond between athletes and coaches is a special one. ❤️
Some of our favorite shots from Sunday's Central Fall Sectional at Juniata College -- the 25th anniversary of this amazing event!!
We're so excited to be at @juniata_college for the 25th Central Fall Sectional!! Good luck to all the athletes competing today!
We can't express how proud we are of the Olympic Flames (Allegheny County) for capturing sixth place at the Special Olympics North America Softball Championships last weekend in Lynchburg, VA!

“I’ve been in Special Olympics for five years. I play soccer, basketball and floor hockey. My mom went online and signed me up. I think it’s good. The friends. I have been coming to Fall Fest for five years. It was a good weekend. I scored a goal in soccer. I like running. I like the dance and Opening Ceremonies. I like the sports. I like video games and I like zombie movies. I graduated from Pleasant Valley High School.”

This month’s Volunteer Spotlights brings us to Bedford County and to the story of the Raynes Family. Jenn Leibfreid and Jeff Raynes are the Long Distance Running/Walking coaches in Bedford. Their 12-year-old daughter, Charlotte, began promoting Special Olympics and inclusion at her school and their 7-year-old son Will wants to be a Unified partner for LDR/W.

“We get back more than we could ever give. We thought we would try this out and now we can’t imagine life without it.”

Throughout the course of their seasons coaching in Bedford, they began coaching Tyler, who is an LDR/W athlete. During their time together, Jenn and Jeff noticed that Tyler was having difficulty at home and reported it to Adult Protective Services. He was going to be sent to a homeless shelter outside of the county, but instead the Raynes family made the decision to take Tyler into their home and they now have full custody.

Recently, Tyler celebrated his 27th birthday with his new family and when they asked him how that party compared to other birthday parties he had, Tyler told them that was the first birthday party that’s ever been thrown for him.

Together Tyler and the Raynes family are working hard toward finding a permanent solution that works best for Tyler, but in the meantime, he’s enjoying life with the Raynes’ and competing in Special Olympics.

It’s been a fantastic week for Special Olympics Pennsylvania competition and events throughout the state… Here’s a look at what we’ve been up to!

From The Tribune-Democrat: ‘Inspirational’ athletes compete at Special Olympics invitational

“My parents are both from Northern Ireland. I’m considered Irish-American. I don’t know if you can hear the accent a little bit. Some people can hear it. I went to Ireland last summer and it was fun. It’s a pretty good lifestyle, but it gets a little boring after while. You know what? It gets cold there. And it’s not like here. Here is very, very, very good and I don’t want to live in Ireland. I want to stay right where I am in Fishtown and not move anywhere else. I like to walk with my dog and see my friends. I go by some of their houses and say ‘Hey, how are you?’ and they say ‘Hi’ back to me. … I’m loving the Special Olympics. It’s kind of competitive with all the other schools, but it’s pretty fun to get to congratulate all the other teams and talk to them and things like that. It’s my second year doing bocce. Our coach, Mr. [Brandon] Hirsch, he’s really into the game with us and really shows respect for us. He really loves us and really loves our team. It’s really, really fun and competitive and I love the experience. You feel regular playing bocce. I’m autism and I feel normal. I like to talk to everybody and they talk back to me and play jokes on me. It’s the best feeling for me. … I’m thinking about doing Project SEARCH at Drexel University. It’s for people on the autism spectrum. I’m going to do an interview in March and if I do well on it, I’ll get accepted there and maybe get a job. … I want to do public speaking. I spoke at the Opening Ceremony today. It was pretty good and I wasn’t nervous at all. I also speak at church. I read there, not every Sunday but some Sundays. The news was here [at the Unified Bocce Championships] today I did want to be on TV and say some things. But, you know what? It’s all good. Maybe next time.” 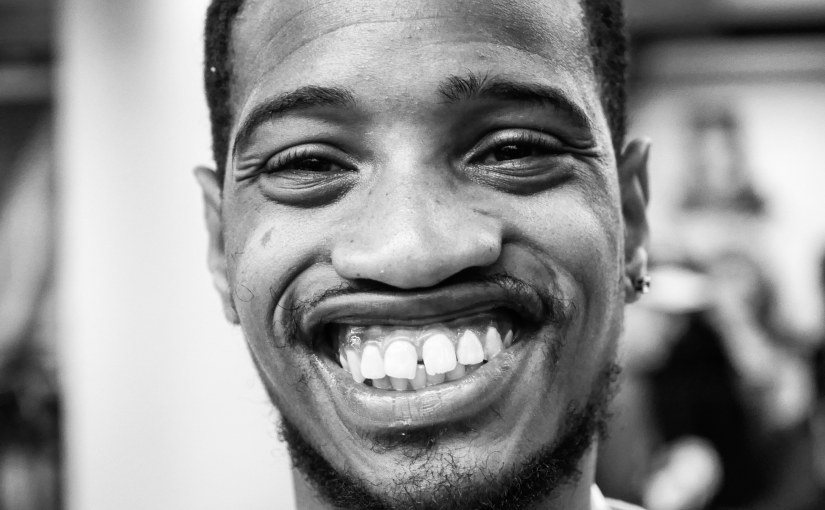 “I’m from Beaver County Special Olympics and I play soccer. I’ve been playing for a few years. I got involved through school. It makes me feel happy, healthy. It keeps me in good shape. It got me into weight lifting too, to stay healthy and to stay fit. I just lift weights to stay fit, but I’m thinking about [competing in] powerlifting. Probably next Fall I should do it because I’ll be 25. I’m a man. I can do it. … I want to be a male model. That’s why I like taking pictures. I want to send them to a modeling agency. I’m very social and friendly. … My favorite part is hanging out with friends and socializing. It’s like a big family. It’s a big friendship type of thing. It’s about being nice and being respectful. Sometimes, you might catch heat or some people might have an attitude, but just stay positive and you’ll be good. … I would tell people that [Special Olympics] is great for Autism, Down syndrome, Asperger syndrome — everybody’s different but we all can do it. If you want to try to do Special Olympics, go out, do it, have fun, have friends or family help you and you’ll be good. And be nice and be social.”